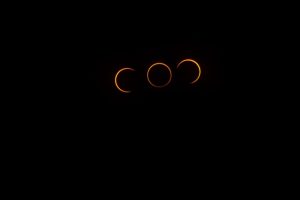 Whether or not there is life in space has always been a question of all people. Whether you believe in green beings that inhabit other planets out there in space or not, you cannot question one thing: the beauty of the universe and the phenomena it has.

Every year thousands of astronomical events take place, such as moon phases, meteor showers, eclipses , occultations, oppositions, conjunctions and other interesting occurrences. Some events that happen can be seen with the naked eye, others just with the help of telescopes.

Last year made us stay at home. But that’s not to say that everyone got to see the various astronomical events that took place in 2020. That’s okay, though. Because every year we are always awarded at least some of them.

According to the astronomical calendar, 2021 will be marked by eclipses , supermoons and meteor showers. And one of these phenomena will happen this Thursday. The so-called “annular eclipse” of the sun is a phenomenon that results in a “ring of fire” in the sky. This is due to the partial concealment of the sun by the moon that passes between Earth and our star.

However, as beautiful as it is, the range is quite small. And unfortunately, this annular eclipse will only be seen in its entirety in northern Canada, east of Siberia and passing through Greenland and the Arctic Sea.

Some cities in the northern hemisphere, such as New York, Toronto, Boston, Paris, London, Berlin, Stockholm and Moscow will be able to observe a partial eclipse. 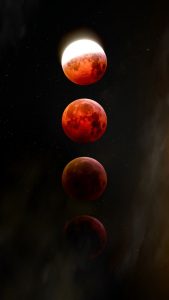 An eclipse happens when one star hides the other. For example, in a lunar eclipse, the Earth is between the sun and the moon. And our planet’s shadow over the moon causes part of it or all of it to “disappear” for a few minutes, causing a partial or total eclipse, respectively.

In a solar eclipse, the roles are reversed. In this case it is the moon that is between the sun and the Earth causing the star to be hidden. It is because of a peculiarity in the moon’s orbit that this third type of annular eclipse is made.

That variation in distance that makes the moon appear larger or smaller in the sky. And if a solar eclipse happens when the moon is at its apogee it is not “big” enough to cover the sun completely. Because of this, a part of the star is still visible and this is what forms the ring of fire. The so-called annular eclipse of the sun.

However, this is not to say that the people of Brazil will not be able to see this ring of fire phenomenon either. Anyone who likes to see these phenomena can follow them through free online broadcasts.

One of these broadcasts is that of the “Virtual Telescope Project”. It will start on Thursday at 6:30 am Brasília time. The video can also be seen on the project’s website, or on their YouTube channel.

In addition to this, the website “Time and Date” will also broadcast the ring of fire eclipse, but it will start a little earlier, at 6 am Brasília time. The peak of the eclipse should happen at 7:41 o’clock.

The natural phenomenon that will take place this Thursday is the last of its kind. And the penultimate overall, in 2021. On December 4th there will be a total eclipse, but it will only be visible, in its entirety, in the extreme south of the planet.